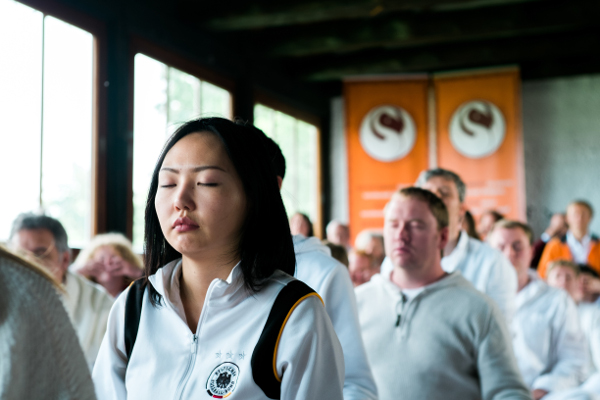 The following is a question/answer response given by Sr. Kriyāvān Kriyāchārya Shivraj.

Question:
Is group meditation necessary and how beneficial is it?
In which stages of the Spiritual journey is it the most essential and beneficial?

Answer:
The spiritual faculties of concentration and meditation on the divine light, sound, and vibration are enhanced.  So are the feelings of faith in the Satguru’s energy transmissions for healing, transforming and enlightening the disciples with wisdom. These are faculties that are essential and required for the spiritual development of the disciples.

In the initial stages of sadhana, not all these faculties are developed in the amateur sādhak with equal strength and/or at the same time, making the practice of techniques a bit complicated or confusing.  Also, for some struggling sadhaks, stuck in a phase of life where there are a lot of karmic disturbances, mental turmoil, and emotional pains, being able to concentrate on these meditative faculties or feeling the energy transmissions bestowed by the Satguru is a very difficult task.  That’s where the spiritual family and the spiritual brotherhood of being co-disciples has a very crucial and vital role to play.

When one sits in a group meditation, then different sadhaks have different strong faculties, due to which the whole group equally and uniformly avails of the benefits bestowed by the Satguru.  Even the transmissions of Shakti-Paath, Praan-Paath, and Shiva-Paath, are felt more prominently and strongly.

Yogiraj always says that “Humanity Is Tied By The Self Same Cord Of Breath.”

That is exactly why the spiritual energy of the Master doesn’t work on any one particular individual, but has its impact on the group as a whole and thereby the group works as a spiritual booster and propeller to the lesser attuned seekers.

When more than one or two human beings with the same faith and the same modus-operandi tune in to the same spiritual frequency, under the divine shelter of the same Master, then the possibilities of making mistakes while practicing the techniques, getting bothered and deterred by personal karmic obstacles, mental negativities and emotional pains of life, or missing out on or not receiving the Satguru’s spiritual grace are reduced and the cord of breath is stronger than a single person’s cord of breath.

In a group meditation, we are creating and harmonizing the universal principle of uniting individual consciousness to strengthen universal consciousness as a result of which we expedite the process of awakening the cosmic consciousness.  All the rough edges are well rounded off and all the bumps and ditches on the path are uniformly filled up.

That is why in the traditional sadhana system group meditations are always more helpful and beneficial for all the sadhaks whether they are “new and amateur” or “old and proficient”.  This is especially important for disciples and sadhaks who are struggling with physical/emotional/mental and karmic issues.

Group meditations are a vital support system at all levels of existence.  Sometimes suffering the pain becomes much less and easier because of the strength of the united core of prana, and the heightened awareness and faith in the Satguru.

The path, the pilgrimage, the goal Yog, Yogi, Yogant GURUDAKSHINA
Scroll to top