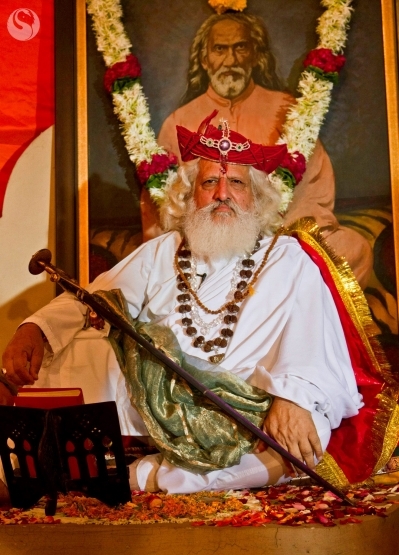 10th May 2013 proved to be a royal blessing for all those who witnessed the spiritual coronation ceremony of Yogiraj Satgurunath Siddhanath. He was honored as the Chhatrapati Shivaji Raje Ratna1 and was bestowed with the title of ‘Yog Martand2’ by the Brahman sansad3 of varanashi. The Brahman sansad of varanashi is the highest authority on the Sanatan Dharma since it is established by the four main Jagatguru Shakaracharyas of Shringeri, Jagannath Puri, Dwarika and Badrikashram jyotirpeeth respectively. The auspicious occasion of Satgurunath’s birthday happened to be the day for his spiritual coronation. The celebration of Satgurunath’s birthday was merged with the grand coronation ceremony and with that, the Siddhanath Forest Ashram became the host to the colorful extravaganza. The Nath Mandal was decorated with scented flowers, 108 colorful oil lamps, red carpets, Rangoli designs, colorful ‘pandal’ and beautiful garlands. Yogiraj Siddhanath and his family were looking stunning and elegant in their regal attires. Besides this, the other men were dressed in white with orange turban, and women were dressed in silk and zaree sarees splashed with different colors, and accompanied with beautiful jewelries. Satgurunath and Satgurumata were ushered on the stage with the blowing of the ranabheri4.

Once Satgurunath and Satgurumata took their seats, the coronation rituals were commenced by Satgurunath’s grandchildren Aryasangh and Ritaum, who came in and lit the mangal deep5 on the centre stage. They were accompanied by their sisters Vedanjali and Ujjaini who came in with the mangal kalash6 which they placed in front of the mangal deep. Then, the granddaughters did the vijay tilak7 and aukshan8 to Satgurunath and Satgurumata Shivangini. The same ritual of aukshan was carried out by Yogiraj Satgurunath’s daughters-in-law Sau. Savani Raje and Sau. Vrushali Raje, who held the thali (plate) with 70 lamps which marked Satgurunath’s entry into his 70th spiritually victorious year.

Kriyavaan Kriyacharya Shivraj, who took every possible effort in making the function grandiose, joyous and royal, welcomed the honorary guests, and in short but powerful words, explained how the visit to Shri Kashi Vishwanath temple led Shri Shankaracharya to acknowledge Satgurunath’s spiritual stature, and made him to decide to bestow upon him the powerful title of ‘Yog Martand.’ He also thanked Babasaheb Purandare, a world renowned historian and an authority on the literary works of Chhatrapati Shivaji Maharaja9, for gracing the occasion with his presence. Shivraj Raje did not forget to bring to the notice of the audience that “the grandmaster of ceremonies Pandit Gagha Bhatt came from Varanashi with the ‘panchateertha jal10’ to coronate Maharaja Shivaji as ‘The Chhatrapati’. Today, on the 10th of May 2013, approximately three hundred and seventy five years after the big event, Pandit Amarnath Mishra comes from the same Varanashi, getting along with him the same holy waters, to coronate Yogiraj Satgurunath as ‘The Yog Martand’ and to bestow upon him the honor of Chhatrapati Shivaji Ratna.” After mentioning this fact, Shivraj Raje also said that the political and the national history are repeating itself as the spiritual and world happening.

Shri Shankaracharya of Dwarika had personally sent his political representative and the President of Brahman Sansad of Varanashi, Pandit Amaranth Mishra, to do the formalities and rituals of the spiritual coronation. Pandit Amarnath Mishra was accompanied by eleven Brahmins from Kashi, and had brought with him the waters of the ‘panchateertha jal’. With these holy waters, the abhishek of Satgurunath, Satgurumata and their family was done. Thereafter, as a blessing, Pandit Amarnath Mishra sprinkled the spiritually charged ‘panchateertha jal’ over the head of each and every person who was present there to witness the divine nostalgia, which took everyone 5000 years back into the times of Prabhu Ramchandra. The divine bliss felt by the audience after being blessed by the ‘panchateertha jal’ was expressed through the waters of their souls as they shimmered through their eyes. Later, Pandit Mishra started his speech by voicing the opinion of Bhagwan shankaracharya of the Dwarikapeeth, who very assertively stated that “Yogiraj Satgurunath is a Rudra Swaroop (rudra avatar) and the only Nath yogi who has made himself uniquely available for the benefit of humanity, simultaneously in the spiritual and terrestorial realms to solve the problems of humanity and bring back the ‘Ram Rajya’ (Lord Ram’s Kingdom) and the Satyug.” Pandit Amaranth Mishra himself mentioned that he intuitively felt that Satgurunath is the Manu, sitting with the sword and four Vedas in front of him and Satgurumata is the human aspect of the divine mother Goddess Tulja Bhavani.

Later, Shiv-Shahir Babasaheb Purandare unveiled the certificate of honor, which was later read by Pandit Amarnath Mishra. After this, Satgurunath was enthroned and was coronated by Pandit Amarnath Mishra with the bejeweled family head gear called the ‘Shinde Shahi Pagdi’ which symbolizes the ‘Chhatra’ (the royal shelter for all). Then, he handed Satgurunath with the Vedas as a symbol of the ‘shaastra’ (scriptures of wisdom), and gave him the sword, that symbolizes the ‘shastra’ (weapon to protect the cause of truth and peace). After this, he requested Satgurunath to say a few words. It was Yogiraj Satgurunath who explained the true meaning of the title that was bestowed upon him. He said that when a king is not just a king but is also a yogi, then his sword is transformed from a weapon of violence into a weapon of spirituality, known as the ‘Gyan Aaseen’. The sword becomes a powerful weapon to separate the truth from the untruth, the pure from the impure and the reality from the illusion. He reinforced that it is the spiritual evolution and the empowerment of humanity that can help in bringing the ‘Ram Rajya’ back on earth plane, and not the violence, wars or hatred. With his spiritually mesmerizing talk, Satgurunath gave a completely new dimension to his spiritual coronation ceremony, and uplifted the already blessed spirits of everyone who was present there.

Seated to the of left of Yogiraj was Hamsa Kriyacharya Rudrasen Raje Shitole, who sat for the fire ceremony (havan), the ashes of which were mixed with the Ganga water used for the coronation. Rudrasen has been the silent backbone of the Hamsa Yoga Sangh, and has been coordinating international hamsa activities for over the last 14 years.

On the behalf of Hamsa Yoga Sangh, Hamsa Kriyacharya Jyoti thanked Shri Shankaracharya, Pandit Amarnath Mishra and The Brahman Sansad, and  gave the vote of thanks to the high profile bureaucracy marked by honored people such as the Collector and the Commissioner of the State. After this, everyone from the audience came to the stage one by one and took Satgurunath’s blessings. Even though this was the concluding aspect of the ceremony, one cannot really say that the coronation ceremony concluded with this, as it is still alive and throbbing in the hearts of people who were present there. Hamsa yoga Sangh is grateful to Kriyavaan Kriyacharya Shivraj and his wife Sau. Savani Raje, whose efforts got forth such a celestial event for all the Hamsas who were present.

1. Chhatrapati Shivaji Raje Ratna- with this title, Yogiraj Siddhanath is addressed as the precious jewel that further glorifies the legacy of chhatrapati shivaji, and through his spiritual contribution, brings pride to the land and the people of Chhatrapati Shivaji. Ratna- adored jewel/ precious Gem.

3.  Brahman Sansad- Religious Congregation of eminent scholarly priests, which is the highest authority.

5. Mangal Deep- the auspicious lamp with five flames which signify the enlightened five senses of soul.

8. Aukshan- waving of a lamp that is done to a person in order to honor his victory and in order to pray for his further success.

9. Shivaji Maharaja- The greatest India warrior king of the 17th century who was the avatar of Shiva.

10. Panchateertha jal- the holy water of the five divine rivers of India, i.e. the Ganga, the Yamuna,  the Saraswati, the Narmada and the Godavari. This Panchateertha jal is also known as ‘Gangaamrut’. 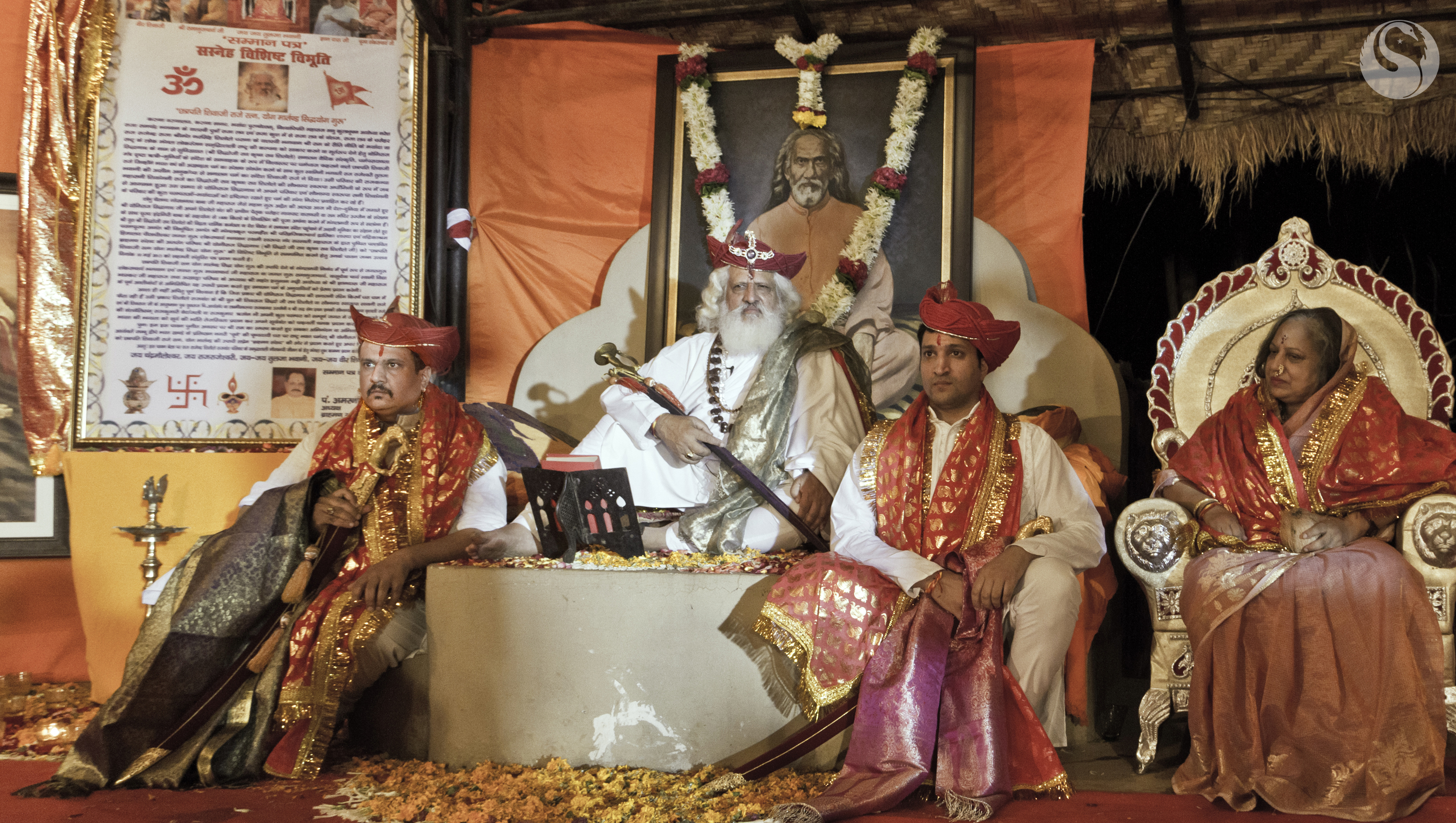 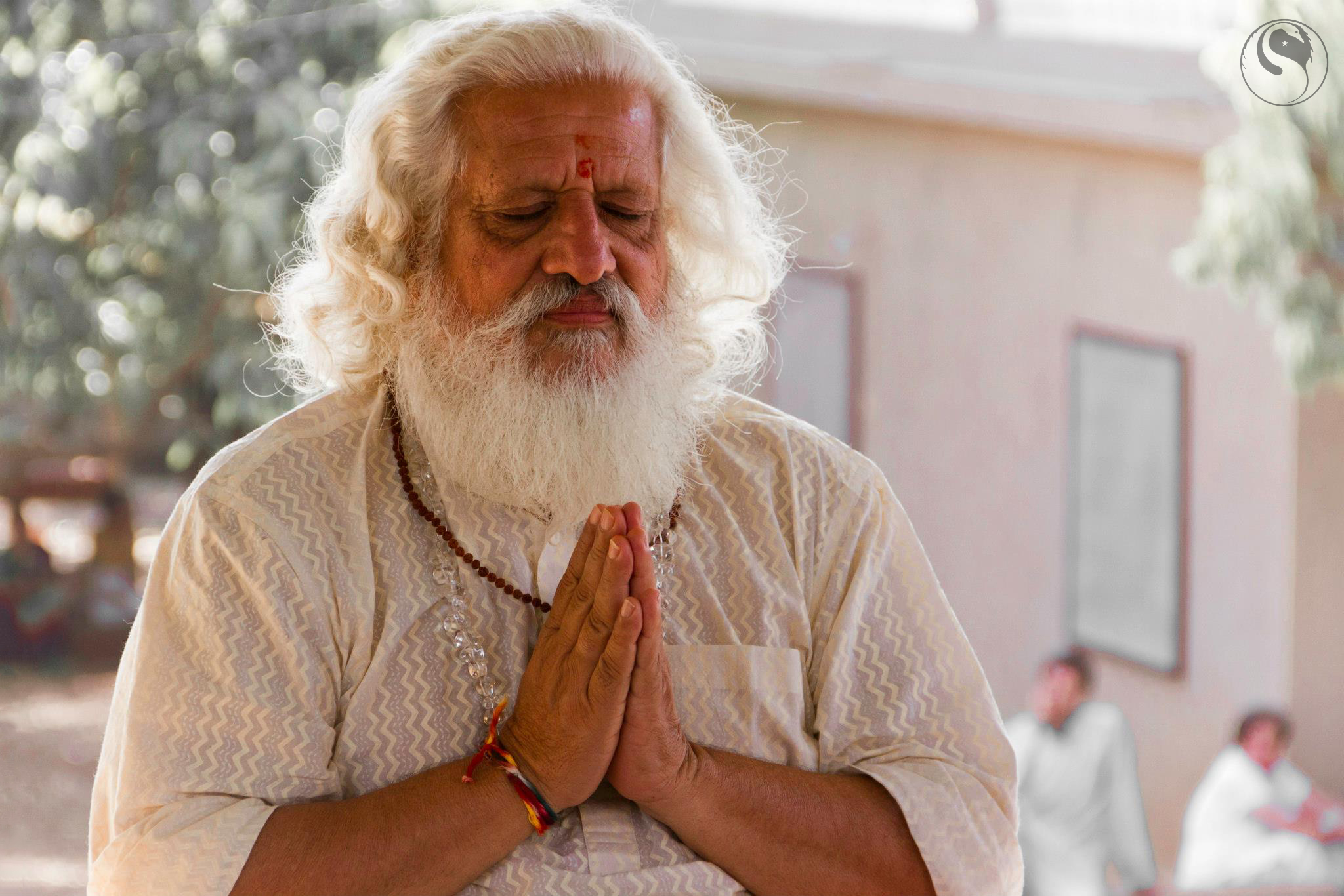 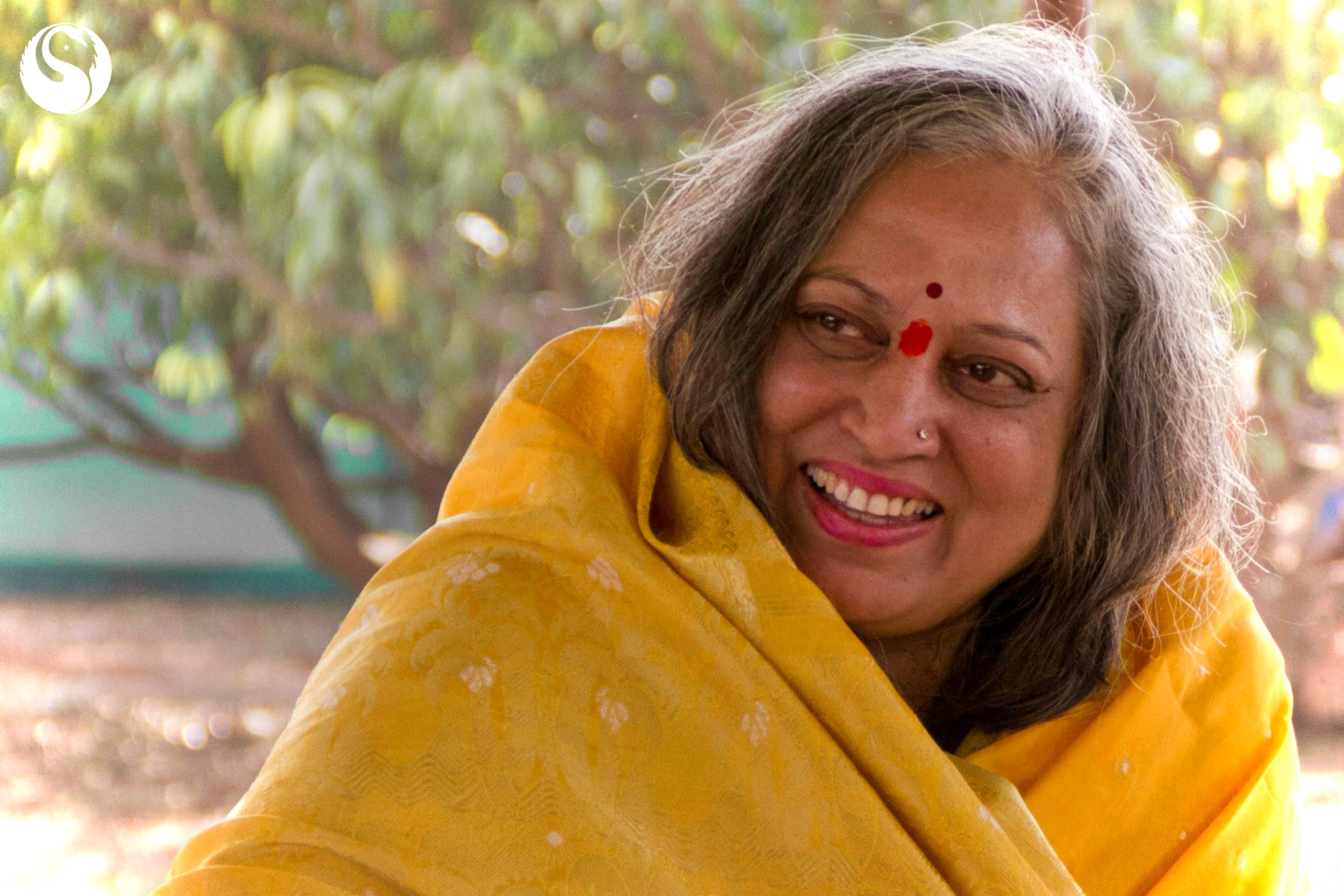 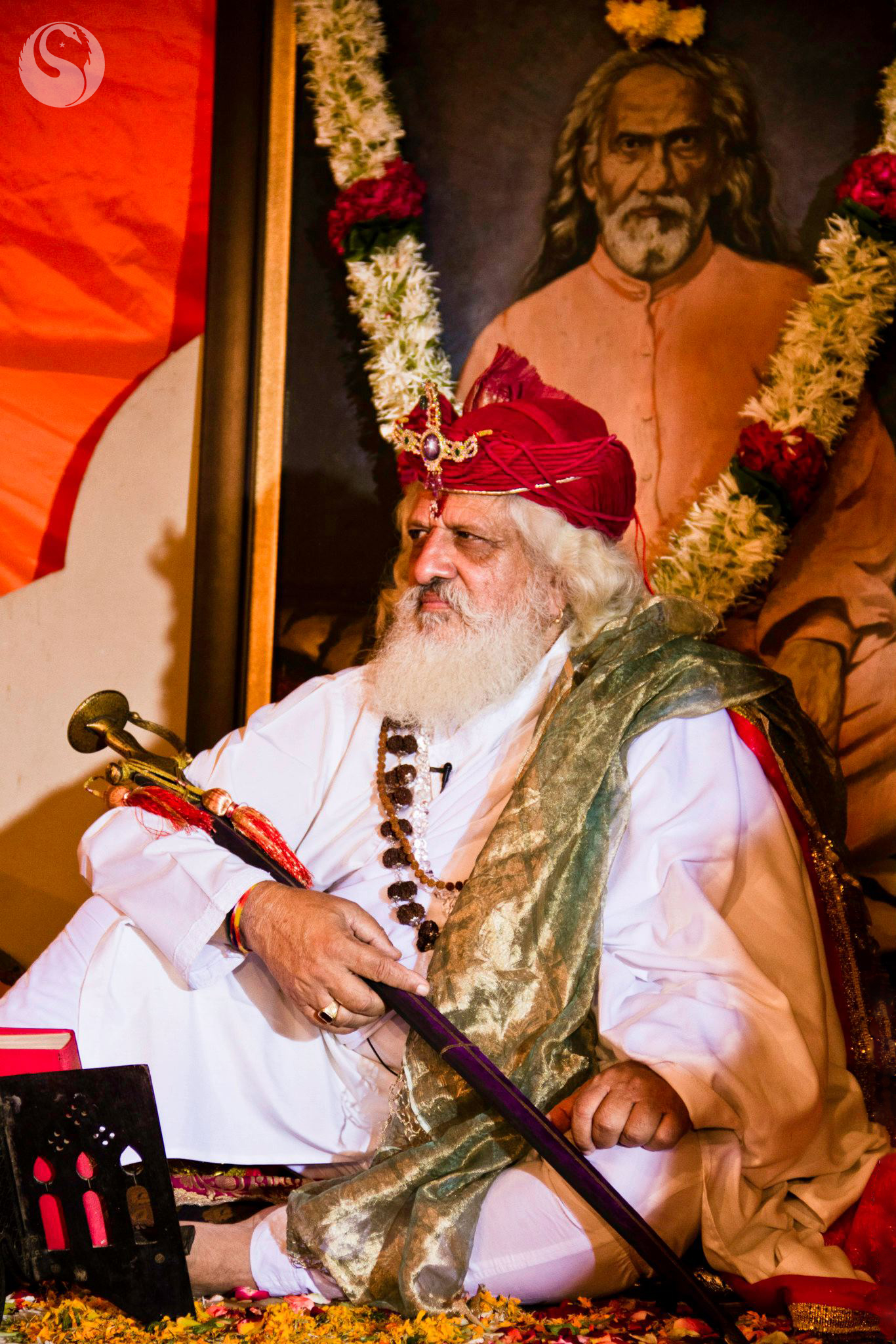 Yog Martand Yogiraj Siddhanath on the day of coronation 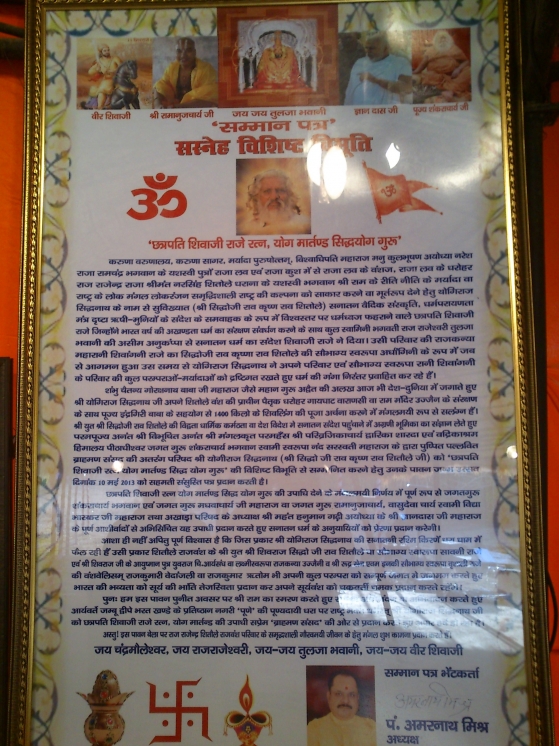 Certificate of honor bestowed upon Yogiraj Siddhanath by Sri Shankracharya